Real Talk About Running, Wellness, & So Much More

Since then, my running goals have changed a few times. Originally, I was going to run a marathon in March, but decided to back away from that goal to run a fast half marathon at the Love Run March 2019. I figured the Surf City Half was a great way to get a tune-up race / workout in to gauge where I’m at for the Love Run. I was excited to jet set to Cali for some warm weather and sunshine in the dead of winter!

However as the week got closer, the weather in “Surf City USA” was getting worse and worse! They were calling for rain in SoCal – this was a bad sign.

I’ve raced in horrible rain conditions before (hello Broad Street 2016!) and figured it’d be alright. But pre-race week was showing some rough signs as well. I was getting very little sleep as it was, and then was taking an early flight to LAX. I went in to this NOT well rested. Then, at ~3:30 AM when it was time to leave for the airport, I spilled a whole glass bottle of hot sauce on myself while digging for Nuun tablets in my pantry. I had been hot-sauced! I had to change, clean up quickly, and get the heck out to catch my flight.

That whirlwind finally ended and I was on my way. The flight itself went by pretty quickly. I had episodes of Marvelous Mrs. Maisel to enjoy and visiting my sister to look forward to. It was great! I finally landed in LA and thanks to ClassPass, I Lyfted over to a hot vinyasa class at YogaBliss (about 10 mins from the airport) and was able to kill time before my sister arrived. It was a beautiful class and was a great way to getting my body moving again after sitting for a 5 hour flight!

Finally, Maddy arrived and I drove us the 45-60 more minutes down to Huntington Beach. The rain was awful and Californians do not know how to drive in it! We finally got done there and commiserated over the awful weather.

To be honest, I was dreading running in the rain. Maddy was too and admitted that if I hadn’t come to CA, she would have just not gone. I felt like I HAD to make her trip worthwhile, so I spent so much time convincing her that the race would be AMAZING, regardless of weather. And the words “we might get lucky!” may as well have been tattooed on my forehead by the end of the day.

Finally we got to our AirBNB to settle our stuff in and then headed to the race expo. It was right where the Start Line was going to be the next day and they had huge event tents set up in a parking lot for the expo. It was a great set up! There were plenty of people handing out bibs, so the wait or process wasn’t long at all. We walked around a bit, but were too hungry to stay too long. It was time for lunch/dinner (I had no idea what meal it was actually — the time difference had my meals ALL off!).

We found a cute Irish pub in Newport Beach and grabbed some burgers and sweet potato fries. Spending time with my sister calmed my race nervous and travel anxiety. The sun started to come out and the forecast was looking better and better… and the calmness continued. The next thing we did also kept me calm and easy – a trip to Target 🙂 We killed time and grabbed some essentials and snacks. We headed “home” and rested the rest of the night. We were both exhausted!

I woke up STARVING at 2AM. My circadian rhythm was so off. I ate my breakfast at around 3AM (I tried to hold off as long as possible) and eventually fell back asleep. I woke up to Maddy’s alarm from a horrible nightmare about me missing the race! Thank God it was just a dream. The first thing I did was check the weather – WE GOT LUCKY! CLOUDS ONLY 🙂 and only a 10% chance of rain. I changed my race day outfit a million times in my head before settling on the perfect one for the weather. I laced up my beautiful new Nike Zoom Fly Flyknits and it was go time!

We took a Lyft to the start since they had a “ride share drop off” point since many of the roads were closed. It worked out well and we had a short walk to warm up our legs. We made it there just in time to stop in the (short!) port-o-potty lines, head to gear check (my first time using gear check – it’s brilliant by the way!), and get to our starting waves.

Something I didn’t realize until we got there was that this race was BIG! There were around 17,000 runners total, including Marathon and 5k participants.  Most people were running the half, though. I headed up towards an early wave while my sister stayed back with her anticipated finish time group. We were off a few minutes later.

I had a race plan in mind – take the first 4 miles extremely easy. Then alternate between a tempo pace and steady pace. I’d then cool down in the last few miles.

By the time I started, the thought of “cooling down” during a race immediately flew out the window. I was there in CA doing a half marathon, I knew I was gonna go for it! However, I convinced myself to keep it relatively easy early on. Mile 1 – 9:38 pace. Great job.

By mile 2 I took a quick bathroom break (thank god for bushes…although I have cuts and scrapes from them that tell me it wasn’t my best idea!). I had been speeding up considerably, so that quick break probably did me some good as far as pacing goes.

At around Mile 4 we were heading up a hill. I started chatting with people around me. I wished someone a happy 50th birthday, someone else was training for the Great Wall Marathon in China. I was happy to be with other happy runners! Once that hill was over, I decided it was time to just go for a faster pace. I settled in around 8:10 for the next few miles. There were some easy rolling hills, and I felt fantastic.

We finally took the turn back on to Pacific Highway 1 for another out and back section (eventually back to the finish). Some more hills and a daunting road ahead waiting for the turnaround. I kept clicking off the miles.

I had wished for the turnaround point, but regretted that wish. As soon as we turned, I felt the headwinds. It was about Mile 9 at this point. My pace immediately slowed by 10 second per mile for the next few miles. One of those miles was close to 8:45 due to some unforgiving hills and waning energy. I told myself it was okay, this isn’t your goal race. Just keep pushing to see what you can do!

Finally the roads flattened out and it seemed to get less windy around mile 11. I told myself to push the pace and give myself 1-2 minute intervals to back off. My average pace sped up with this strategy. I was just playing around to see what my legs were willing to do!

I kept seeing the signs for the full marathon and just felt grateful I wasn’t doing 26.2 today. A lot of the course was the same, so when I saw “Mile 26” I knew I only had .2 to go 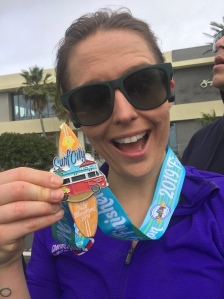 for my race. I took off at a fast pace and it felt SO GOOD! I was passing a ton of folks and cheering them on to follow me. I pretended I was at the end of my next marathon and getting that Boston Qualifying time.

I crossed the finish line excited and ready to keep going –which was a good thing, because I had 3 more miles left on my schedule for the week 🙂 I went about 2.7 more miles at an easy easy pace on the trail along the ocean, and then finally called it quits. It was a great cool down and killed time while I waited for Maddy to finish. Her wave had started a while after mine, and I knew I had some time.

Once I was done, I headed back to the finish line and waited for her there. I used that time to check my results (yay, they were already posted!). I knew I was going to PR my stand-alone half marathon – that was a 2:02 set back in 2014 and would be fairly easy given my current fitness to break. I have had a LOT of running experience since then, but hadn’t made any efforts in a half marathon since then. My unofficial PR had been during the Marine Corps Marathon where I came through in the first half in 1:53 and some change. I was happy to report that I still beat that PR, too! My official time was 1:52:55. Although this wasn’t a goal race by any standard, it’s always great to see a PR, gauge where I’m at in my current fitness, and set some new expectations for myself.

A few minutes after I checked my results, I saw Maddy was coming down the finisher chute. She came in with a huge smile on her face! I was SO glad to see that, since I knew she was nervously dreading what the race might bring. She CRUSHED her predicted finish time, and said she felt great the entire time. I was so proud and happy the race and her trip was worth it! 🙂 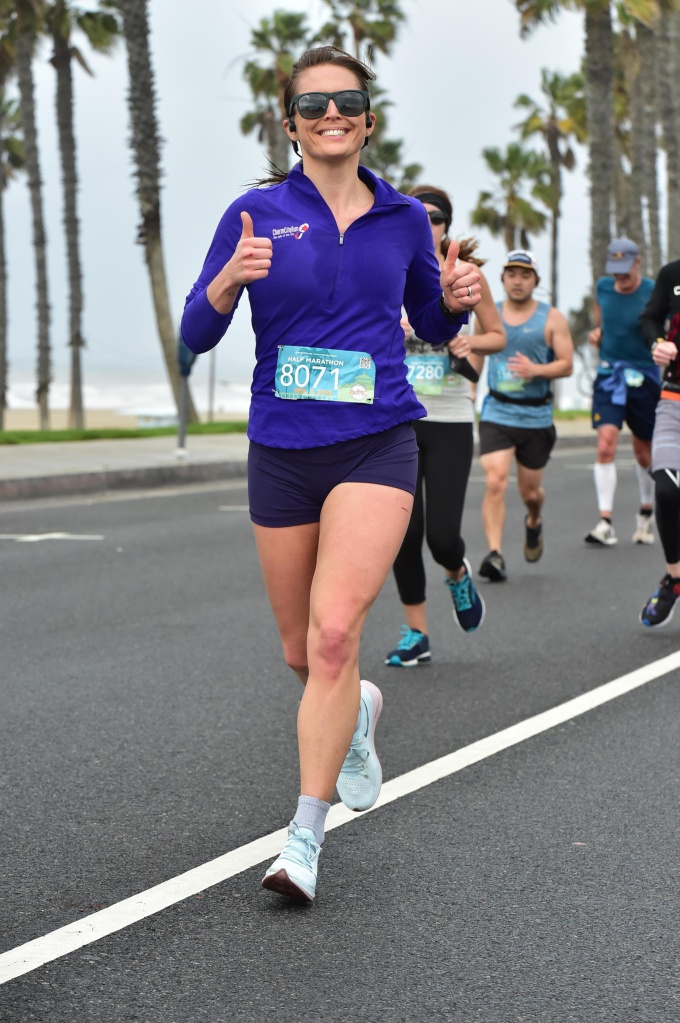 We went to grab our gear, took some photos, and chit-chatted about how well both of our runs went. However, we were both STARVING and couldn’t wait for brunch! We found a cute little pub called “The Alley” (GREAT name by the way!) and had an amazing meal. They had bottomless mimosas for $10 which Maddy enjoyed, and I got a Bacon Blood Mary (with tons of real bacon in the glass!). I had a delicious chorizo, spinach, avocado omelet with sweet potato fries. It hit the spot SO HARD!

After our great meal, it was time to start heading back to L.A. It was around 2pm and my flight wasn’t until 9:30, but my sister had a 5 hour drive ahead of her. So she dropped me off close to the airport so I could hangout and watch the Super Bowl at a local bar. I ate a salad there, had a great Irish Red Ale, and enjoyed Adam Levine taking his shirt off during the half time show.

I then went to another yoga class at the same studio. Yes, I had that much time to kill! This class was “restorative yoga” and was basically a guided meditation / nap / a few extremely gentle yoga poses. It was the best way to go in to a red-eye flight in my opinion! I took a Lyft to the airport and the security lines went more smoothly than I could have ever imagined.

I didn’t sleep much on the flight back home but I crashed as soon as I hit my own pillow. It was a great trip! It was my first time flying out for a race, and while it was a WHIRLWIND, it was fun, and totally worth it.

I have a few weeks to go before my goal Half Marathon, but I’m definitely hopeful for a huge PR there, too! I’ll be doing a lot more speed work in the interim to get me faster. Plus, I’ll have a taper and focus more on pre-race nutrition, warming up, and sleep! I have a few races beforehand that I won’t be “racing”, but it will definitely be hard not to. I almost forgot how fun racing was 🙂 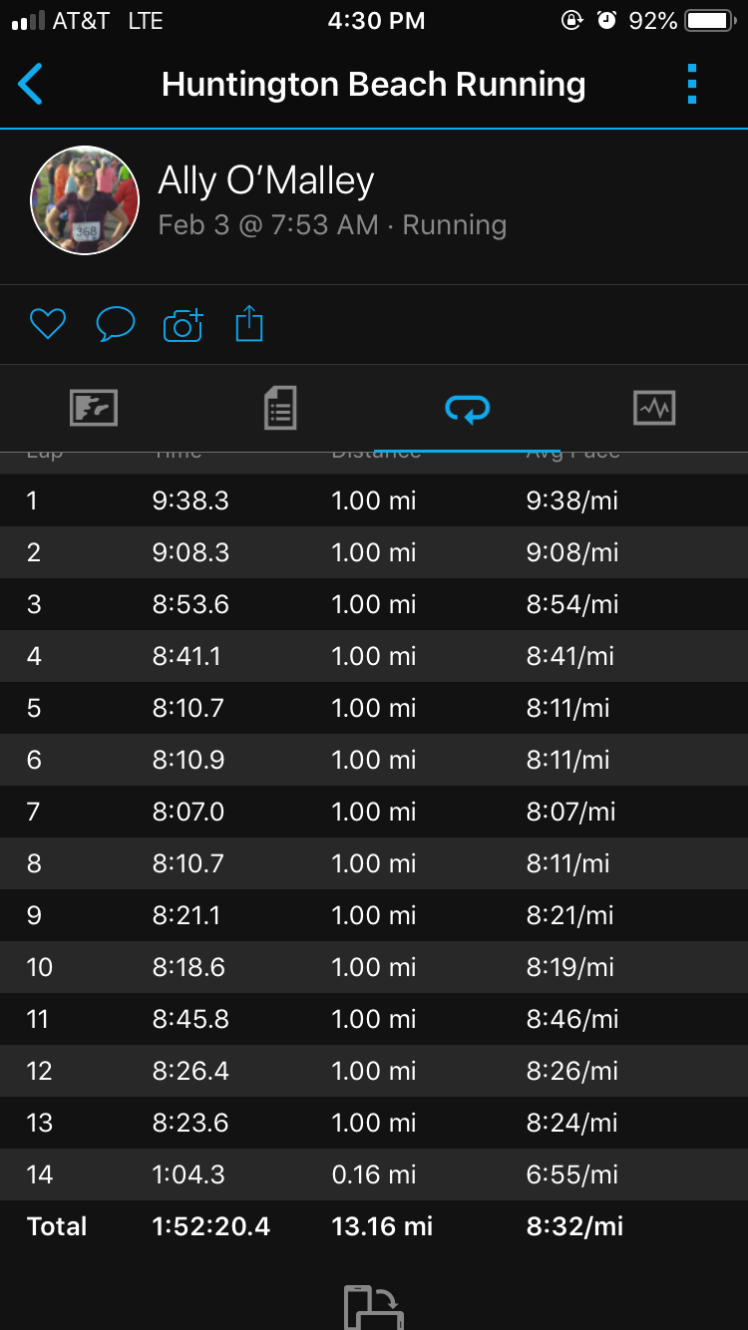