Real Talk About Running, Wellness, & So Much More

Thanks to National Running Day a few months ago, I — along with many others — signed up for a FREE 5K/10K race in Philadelphia on Sunday, September 23, 2018. Despite the fact that it was free, it was put on extremely well and for a GREAT cause!

The Global Energy Race, held internationally in 23 cities, donated two slices of bread for each kilometer ran by each runner. These donations went to local food banks across the world. The race also had decent swag – a hat, arm sleeve, t-shirt, and bag. I was surprised at how much we got for the free registration, plus good causes that the race was raising money for!

My mom had signed up for her first 10k, so I couldn’t not go! I was so proud of and excited for her. She crushed her race. I slowly jogged along for mine. 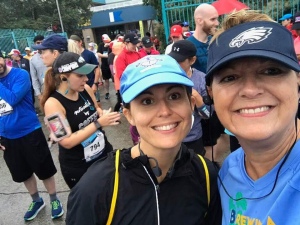 I used it as a recovery run post-20 miler (on Saturday). So with a tired body and tired legs, I schlepped down to Penn’s Landing in the rain at 5:30 AM on a Sunday morning. Proof that runners are crazy? YES!

But since I used this as a recovery run, my time was perhaps my slowest race pace ever. I even walked off the course back to the finish festival area halfway through the race to use the port-o-johns and took my time. I was not concerned about my time at all.

This run was just to see how I’d run on tired legs. I wanted my body to know what it felt like after running 20 miles to run 6.2 more – albeit the next day, it’s still a great way to accumulate miles and simulate race fatigue.

I had to check my ego a few times to not try to speed up and get a better finishing time. I reminded myself that the goal was recovery, so the slower the better. I decided to focus on keeping my HR below 150 at all times. I ended up average at 134, which is GREAT for me for a recovery run! My Garmin said my average pace was 10:27, but with the quick break in the middle, I ended up finishing in 1:07:11 (10:50 min/mile average).

The course was two out-and-backs in either direction down Columbus Blvd in Philly. I ran this stretch of road during the Philadelphia Marathon in 2016, so I got fun and nostalgic flashbacks to that amazing race! We also ran by Moshulu, D&B’s, Spruce Street Harbor Park, and all the other great bars and attractions on the east side of Philly at Penn’s Landing. We even ran through a (narrow) bike and walking trail I had never come across before, so I even saw some new sights!

The rain made it rough, but the energy of the race was pretty great! Several of the local running clubs had big showings and you could see people on the out-and-backs cheering each other on the whole time. Since I was towards the back of the pack, I hung with a more spirited, less serious crowd than normal. It made the race more fun! There were so many great runners working hard with motivating enthusiasm.

The post-race festival was great, too — but it was unfortunate that it was raining, so not many people stayed long. There were free grilled cheese sandwiches and Kind bars, several local vendors, and free post-run massages! They had tables and chairs set up with umbrellas to hang out and lots of room to move around and mingle. We stayed for awards, which were very short! They only announced the top 3 overall (no age group awards).

Some folks from the Burlington Running Club went to breakfast at a diner in NJ afterwards. It was great to refuel and commiserate over being hungry, tired, wet, and cold. But we all got out there and did it together and had a blast, and several members of the group got PRs!

The rest of the day was spent letting my legs rest and watching the Eagles WIN at home and QB Carson Wentz’s first game back after injury.